The Trough is the third episode of season 1.

Frank takes Bill to a football game, where he meets his boss, Roger Dunbarton. Sue is given a surprising opportunity, and Kevin gets stoned as he does his best to improve his grades.

Frank gets a call from Kevin's school letting him know he is still failing his classes. Because of this, Frank disinvites him to the game and decides to take Bill instead. When they get there they discover they are seated with Roger Dunbarton, CEO of Mohican Airways, and his wife Brandy. Roger begins to befriend Frank and Brandy takes Bill to use the bathroom where he is traumatized by the trough.

On the way home from they run out of gas, but Rosie is at a bar nearby and helps them out. When Bill mentions talking to Dunbarton at the game however, this makes Rosie think Frank is no longer on their side.

Sue takes Maureen to the mall where they run into Ginny, who talks to Sue for hours about her marriage falling apart.

While left alone, Kevin meets up with Bolo and Lex to smoke weed. He brings a record with him to roll joints on, which happens to be one his parents used to play for him when he was little. He remembers how close he used to be with his dad and Frank telling him he'd always love him. This motivates Kevin to keep his promise of passing school.

Frank: (to Bill) How would you like to go to a football game in the city with your old man?

Bill: Wow, yeah! I though you were taking Kevin.

Bill: When did he decide that?

Frank: Just now when I told him.

Kevin: (opens the door furiously) This shit took me all morning! You promised you were gonna take me!

Frank: (angrily) Well, you lied to me! You gave me your word saying you were working on those history assignments, and all of a sudden, I get a call from your teacher saying you haven't done a single one!

Kevin: It's history! It's not going anywhere!

Frank: When I get home tonight, I want to see half of those assignments completed, or as God is my witness, I will put you through that fuckin' wall!

Kevin: We're outside, genius! There is no wall!

Frank: Then I will build one and I will FUCKING PUT YOU THROUGH IT!

Sue: (hushed) Would you please stop screaming in front of the entire neighborhood?!

Mr. Holtenwasser: I heard, but I didn't understand it.

Frank: (to Sue) Sorry Susan, but your son is no good. (to Kevin) You're not man enough to live up to your agreement, so Bill gets to go to the game. That's final! He's a man. He finished all his homework!

Bill: I didn't have any.

Frank: Shut up and get in the car. (turns to Kevin) And you get in the house!

[Frank stop the car and drives back to Kevin]

Frank: (sternly) What did you say?

Frank: That's what I thought.

Sue: Well, Kevin, you made your bed.

Sue: (angrily) Don't you talk to me that way!

Kevin: NOW, LOOK WHO'S SCREAMING IN FRONT OF THE WHOLE NEIGHBORHOOD! 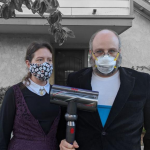