The Color TV is a television owned by the Murphy's. The purchase of it sets in motion various plots throught the first season.

The Murphy's have owned two color TV's. The first was a Sonabishi, which Sue and Frank used Kevin's college fund to buy from Sawitzski and Son's. Bill accidentally destroyed this TV with a magnet. Frank tries to get a refund, but is refused.

Once Bill destroys every Sonabishi in the store with the same magnet, the batch is deemed defective and the Murphy's are given a new Patton House TV in exchange.

In season 2, Frank sells this TV in order to buy Sue her locket back.

By Season 3, the Murphy family appears to have gotten a new color TV (although this one is a different model considering the fact that it's smaller than the Sonabishi and Patton House), along with another one for Bill's bedroom. 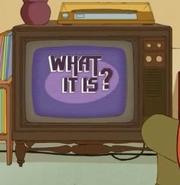 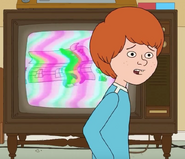 The TV after Bill sticks a magnet to it
Add a photo to this gallery
Retrieved from "https://f-is-for-family.fandom.com/wiki/The_Color_TV?oldid=4682"
Community content is available under CC-BY-SA unless otherwise noted.