F Is for Family Wiki
Register
Don't have an account?
Sign In
Advertisement
in: Characters, Female Characters, Outdated,
and 8 more

Susan "Sue" Murphy (née Chilson) is the deuteragonist of F is for Family. She is the wife of Frank Murphy and a former part-time Plast-a-Ware (a parody of Tupperware) sales representative, and later secretary. She is the mother of Maureen, Bill, and Kevin Murphy. In the fourth season finale she gave birth to Megan.

She is voiced by Laura Dern.

Sue played softball in high school, her team making it to the championship. She also won an academic award. After high school, she enrolled in college majoring in physics (as seen in the flashback to 1958 where Sue is seen holding a physics textbook) and began dating Frank Murphy. She was selected as a Future Lady Leader at her school. Sue became pregnant with their first son, Kevin forcing Sue to drop out of college much to the fury of Sue's parents especially her father Stan Chilson which is why he hates Frank so much thinking he ruined Sue's life. They married and Sue became a stay at home wife and mother. Eventually, she had three more children with Frank, Bill, Maureen, and Megan. Feeling bored at home she eventually took a job selling Plast-a-Ware.

In "Saturday, Bloody Saturday" she has a full-on emotional breakdown stemming from the feeling that she has nothing outside of being a wife and mother. In "F is for Halloween" she gets offered a promotion at Plast-a-Ware, which she accepts (despite Frank's attempt to stop this). At first, she enjoys the job, but as time goes on she begins feeling stressed, and like her boss is taking advantage of her.

After Frank is fired, she asks to become a secretary as someone had recently quit, so she could earn money for the family. She doesn't appreciate the crude language of her co-workers but learns to deal with it. The company is looking for a new product, and Sue eventually comes up with the idea of spin-drying lettuce. She sells her locket from Frank at a pawn shop to pay for the prototype, but the head of Plast-a-Ware winds up taking credit for the idea.

Throughout all of this, Sue's marriage begins to fall apart when Frank starts working for a vending company, but they eventually manage to work things out after Frank realizes how badly he has treated Sue. Frank buys back her locket by selling the color TV much to the children's horror, and they start discussing their future plans. After unknowingly having sex with Frank using a broken condom that Smokey Greenwood pierced with a pin, she becomes pregnant with their fourth child ironically mirroring her first unplanned pregnancy with Kevin once again causing a halt in her ambitions.

Sue is a woman who obviously loves her family very much. Though like her husband, she succumbs to the stress of daily life rather easily, and this manifests itself in screaming matches with her husband. She also suffers from depression and is known to break down at times.

She doesn't seem to know what she wants in life, as being a stay at home mother left her anxious and bored, yearning for more purpose in life. Her job though leaves her drained and stressed without much time to herself. She does eventually figure out a clear ambition when she invents the Salad Tosser, though this idea was stolen from her, leaving her back at square one. Sue also has the major belief that she must be successful, and that she felt becoming pregnant stopped her from blossoming into an independent woman.

She is overly polite, which can be a hindrance to her. For example, she's too polite to stop her acquaintance Ginny from talking about herself for hours and had a difficult time adapting to the vulgar environment at Plast-a-Ware's head office.

In contrast to Frank, she is shown to be a nice and soft and lenient parent (when she wants to be), which is a low bar when compared to Frank. As revealed in Bill Murphy's Day Off she feels like she has to do that to make up for Frank’s harsh parenting. But that doesn’t mean that she’s that great of a mother and she doesn’t have her bad parenting days like when she yelled and hit Kevin and Bill with a wooden spoon when they were fighting instead of talking to them. Telling Bill it would be his fault if she lost the baby. She can also unintentionally neglect Bill and Maureen and yelled at the two children when they complained that she and Frank fought too much. She is also too lenient on Kevin sometimes. She’s still a better parent than Frank nonetheless, even though that's a very low bar to achieve.

Frank is Sue's husband. The two have a loving but strained marriage, mainly due to financial reasons. This stress causes both Sue and Frank to be extremely volatile and they often get into loud verbal arguments.

They first began dating in 1958 and were very much in love, though when Sue became pregnant they were scared for their futures and of raising a child. They decided to go through with it together, with Frank promising to be Sue's co-pilot. Years later Sue feels as though Frank was not living up to this promise, and never seemed to support her in her ambitions while she always lent him her support. However once Frank realizes this he makes an effort to do better.

Despite Frank's selfish and arrogant personality she always gives him the benefit of the doubt. But Frank does however genuinely love Sue with all his heart.

Kevin is Sue's oldest son. She is much more lenient towards him than Frank is and she tries to be understanding towards him but at times she can be too easy on Kevin. Also, Sue is aware that if Kevin is yelled at about something he isn't supposed to do, it will only make him want to do it more (A concept that Frank always forgets or doesn't listen to.) She did get upset with him when she found out he was failing several of his classes but was proud of him when he managed to get a C. It was later revealed that as a child an accident caused Kevin permanent brain damage and because of this, Sue believes this is the best he can hope to do. It's implied she feels very guilty over this fact and because of this treats Kevin very delicately, and tries to get Frank to do the same. Sue eagerly convinces Frank to be nice and not yell at Kevin. She also encourages and tries to nurture his more sensitive side. Sue was very proud of Kevin when he began reading books for fun.

Bill is Sue's middle son. She is generally sweet and maternal towards him, though he often gets ignored in favor of Kevin and Maureen. Sue wishes Frank would discipline him more when he acts out which is weird because he rarely does act out. In a heated argument, Frank states that Sue coddles Bill too much, which he strongly believes is why Bill is often thought of as a pushover who's too sensitive. But at the end of the day she does care about Bill.

Maureen is Sue's second youngest child and oldest daughter. Sue seems to be a little more aware of Maureen's rebellious nature than Frank is and is more strict with her. Sue tried to encourage Maureen after Frank told her there was no girl astronauts by telling her women would be astronauts someday. In fact, she always encourages Maureen's ambitions. She comforted her when she was humiliated by Frank during her school play.

Stan is Sue's Father. He is very loving and protective of Sue and wanted her to get a college degree and join the advanced workforce. He resents his son-in-law Frank for impregnating her before she could finish college. When Frank lost his job with Mohican, Stan secretly sent Sue $100 per month to keep the Murphy family afloat until April of that year. Sue's relationship with her Father has at times driven a rift between herself and Frank as Frank is constantly sick of Stan reminding him that he ruined Sue's life and still hasn't let it go after 15 years.

Louis is Sue's Brother. Sue is apparently in contact with him but hasn't seen him for some time. He seems to be isolated from his socially conservative family as he lives in Miami with a male roommate and had been arrested for cruising in a bus station men's room. This changes in Season 5 when Louis moved back to Rustland, and opens a Karate Dojo 10 minutes away from the Murphy residence.

Marilyn is Sue's mother, not much is known about their relationship. But it can be assumed that she used to be a little critical of Sue and even though she somewhat hates Frank as much as her husband, she doesn't openly display contempt for Frank like her husband does as Frank says "She does it with a smile". It is hinted that she is the one who blames Sue for quitting college and getting pregnant because after Stan blames Frank for impregnating Sue and causing her to quit school, Mrs. Chilsons says that ”Sue has always done things her way”. Marilyn stated that she never expected much out of Sue, which is the exact opposite of how Sue feels about herself. 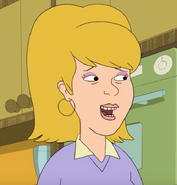 Sue in her Plast-a-Ware blazer

Sue working as a secretary

Community content is available under CC-BY-SA unless otherwise noted.
Advertisement