Shire of Frodo is a progressive rock band in F is for Family.

They have released at least two albums. One of the albums that this band has released is called Journey Down The River Faedra. According to Kevin, the artwork for this album features a "Queen's Alchemist". The other is Castle of the Elfin King, which Kevin plays in episode two. The track listing for this album is; The King, Black Cat, Big Foot, and Mordor.

The writers stated the fictional band was mainly based on Emerson Lake and Palmer, Yes, King Crimson and Jethro Tull. Their album cover art seems to also be inspired by Starcastle, Uriah Heep and Greenslade. 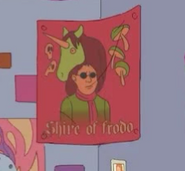 The band's name misspelled on the marquee 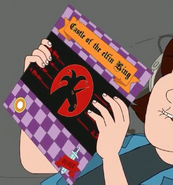 Castle of the Elfin King on 8-Track 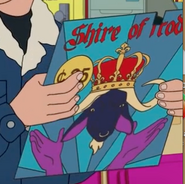 Add a photo to this gallery
Retrieved from "https://f-is-for-family.fandom.com/wiki/Shire_of_Frodo?oldid=5879"
Community content is available under CC-BY-SA unless otherwise noted.