F Is for Family Wiki
Register
Don't have an account?
Sign In
Advertisement
in: Characters, Male Characters, Outdated,
and 15 more

Scoop Dunbarton (1947-1974) was a supporting antagonist in F is for Family, serving as the central antagonist of the second season and a posthumous antagonist in the fifth and final season.

Scoop was an alcoholic Minor League Baseball player until he had to retire due to being kicked in the head by a horse (which crushed his skull and left him with a large depression on the side of his head) leaving him with permanent brain damage. He was the nephew of Roger Dunbarton, who brought him in as Frank's replacement after he was fired.

Before his injury, Scoop was despised for his reckless behavior, excessive drinking, and his attempts to re-segregate baseball.

Scoop was vastly despised by all of the Airport employees because of the fact that he was very rude and condescending towards them. In addition he had: uncontrollable anger, sporadic mood swings, and lack of reasonable thought, endangered other employees all over the airport. His extreme irrationality and mentally unstable behavior caused Bob to regret firing Frank and even stated that Roger was a fool to fire Frank.

In the Season 2 finale, the airline employees had enough of Scoop and tried to get Frank back so they decided to get rid of Scoop. After being drugged (in retaliation for "stealing" Frank's job and wreaking havoc and stuffed into a luggage bag by Frank and the airline employees, Scoop eventually regained consciousness and beat up the African-American terrorists. Though while he celebrated his victory, Scoop accidentally stepped on the suitcase with a bomb in it and was killed by the explosion, which blew his lower body right off. The laminated newspaper article describing his accident with the horse (named "Big Harold") flew off and slit the throat of his uncle, Mr. Dunbarton, killing him.

Arguably the three best words to describe Scoop are: incompetent, irrational and immature. This is partly because of his head injury which he got from the horse and his desire to re-segregate baseball.

Both the minor leagues and Mohican hated him because of his unpleasant nature. It's ironic to think he was once described as having a "big heart" let alone having a heart in the first place. This can be indicated by how he typically has a dissatisfied or angry look on face such as when he is first seen. It's never reveled what led Scoop down such a terrible path.

Scoop is typically compared to his greedy uncle and boss Roger Dunbarton because both of them are antagonists from the same family and both of them are self-centered, egotistical, short-tempered and cruel pricks. However unlike Roger, Scoop was brainless, xenophobic, sour and incompetent. While Roger was more so Witty, duplicitous, more so arrogant than sour and also caring about his company and job but not his workers.

Bob telling Frank what happened with Scoop taking his job.

Scoop's first words after his injury.

Scoop taking back his newspaper from Frank. Frank asking Rosie about Scoop getting drunk.

Scoop telling Bob he was intimidated by his leadership skills.

Scoop throws suitcases in an airplane.

Bob, Frank and Rosie stuffing a drugged Scoop in a bag onto a plane

Scoop beginning to take on the hijackers.

Scoop happily cheerful with all the people shortly before his demise.

Dunbarton threatening Frank about his Nephew to stash him. 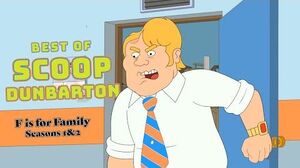 F is for Family - Best of Scoop Dunbarton (John DiMaggio)
Community content is available under CC-BY-SA unless otherwise noted.
Advertisement